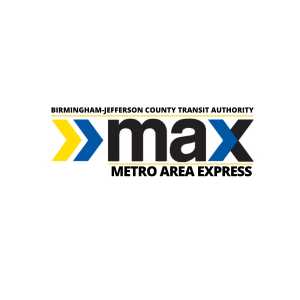 BIRMINGHAM, AL (September 20, 2021) The Board of Directors of the Birmingham-Jefferson County Transit Authority (BJCTA) is announcing the confirmation of Charlotte Shaw as the new Executive Director/CEO of the transit agency. She will be responsible for overseeing BJCTA’s transit growth strategy, ridership and implementing new forms of transit micro mobility to complement BJCTA’s existing fixed and Bus Rapid Transit (BRT) routes.

Ms. Shaw come to BJCTA as a senior leader with over 28 years’ experience in the private and public sectors.  Her background includes working in various multifunctional roles including Capital Planning, Operations, Contracts and Procurement, Project Management, Engineering, Construction, and Information Technology.

Ms. Shaw’s vision is to continue efforts in developing the BJCTA as the premiere Transit System of choice for all municipalities. She plans to accomplish this by providing excellent customer service and convenient bus stops with easy connectivity for riders to and from work, to social and sporting events, and to Birmingham’s numerous tourist sites.  Under Ms. Shaw’s leadership, BJCTA will make efforts to bring economic growth to undeveloped areas surrounding transit using Transit Oriented Development (TOD) opportunities.

“It’s imperative that we change the public image of transit. People died for the right for all to have free and clear access to public transportation, which demonstrates the greatest unity to live and work together as a community regardless of race, status, or gender,” said Ms. Shaw.

Mayor Randal Woodfin of the City of Birmingham AL. appointed Ms. Shaw to her current role as the Deputy Director of Capital and Special Projects for the City of Birmingham. In this role, she managed the City’s largest budget of $60M for the completion of the city’s first Bus Rapid Transit (BRT) system, called the Birmingham Xpress (BX).  Ms. Shaw is largely responsible for saving the BRT Program with the Federal Transit Administration under her leadership.  She was titled the “Savior of the BRT”, by the City’s Director of Transportation, Mr. James Fowler.  Under her leadership the BRT went from 30% design to 100% design and the start of construction within one year during the Pandemic.  The BX will connect 25 neighborhoods to opportunities and vital services along its 10- mile corridor traveling from the Woodlawn Transit Center on 1st Ave N between 56th and 57th Street to the CrossPlex Transit Center at the intersection of Avenue W and 47th Street Ensley. BX).  BJCTA is expected to begin operations of the BRT for revenue service in June 2022.

Prior to coming to Birmingham, Ms. Shaw worked at the Metropolitan Atlanta Rapid Transit Authority (MARTA) for five years as the Senior Scoping and Screening/Budget Manager in the Capital Budget and Planning department.  There she led the capital budget call and planning for departments to assist with the development of its short and long-range plans.  Ms. Shaw was also responsible for preparing MARTA’s annual budget of $350M and $3.5B long range budget for the capital improvement program including setting the criteria for evaluating and prioritizing major construction and renovation projects for review and approval by the MARTA Board of Directors.  She held various other roles in Contracts Management where she was responsible for overseeing major A&E and Construction contracts.

Ms. Shaw began her career as a Contract Administrator for General Dynamics which was regulated under the Department of Defense; she has worked as a Contracts/Pricing Manager for McDonnell Douglas Corporation; Manager of Subcontracts at Westinghouse Remediation, Inc; Executive Vice President, Program and Contracts Management at SunTrust Bank; Sr. Contract Manager for Professional Services and Licensing Contracts at Oracle; and in Financial Services Point of Sales (POS) at NCR.  In addition to these roles, Ms. Shaw has been the owner and CEO of two small businesses focused on Business Development and Environmental Remediation.

Ms. Shaw holds a Bachelor of Arts Degree in Political Science, Public Administration, Urban Studies and Pre-Law from Drake University.  Charlotte was competitively selected as a 2019 ENO Fellow in which she was exposed to various transit authorities in the Southeast region.  Amongst her many professional affiliations, she is a member of the American Public Transportation Association (APTA), The Conference of Minority Transportation Officials (COMTO), National Association of Female Executives (MAFE), Women in Transportation (WTS), Project Management Institute (PMI), National Contract Management Association (NCMA), and the National Institute of Government Procurement (NIGP).

Ms. Shaw will replace the current CEO, Frank T. Martin who has led the agency since December 2018. She will assume this new role at BJCTA effective Friday, October 1, 2021.

The end of the line pick up for the 43 Zoo route will now be in front of the Egg and One Café due to construction in that area.
0

The Greater Birmingham Ministries will host an event on Saturday, August 7, 2021.

In Wake Of COVID-19 (aka: coronavirus), our monthly ADA Paratransit Advisory Committee Meeting will be held remotely (Dial-In) only. Please call in (15 minutes early to avoid busy concerns), using the information below:

The Paratransit Advisory Committee serves in an advisory capacity of advocates for transit.  During this meeting, the attendees may review transit information, upcoming projects, ask questions and discuss comments and complaints with BJCTA staff members. The Session will begin at 2:30 PM and will end at 3:30PM.

Written comments or complaints may be submitted during the meeting or by email to ada@bjcta.org.  Comment forms are available on BJCTA’s Website. 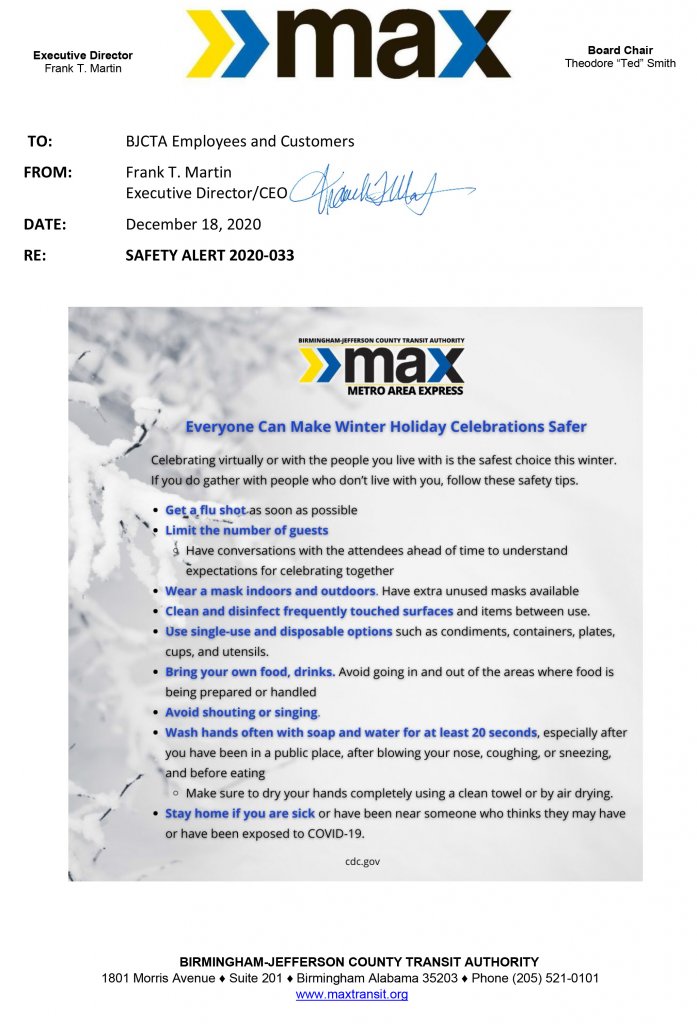 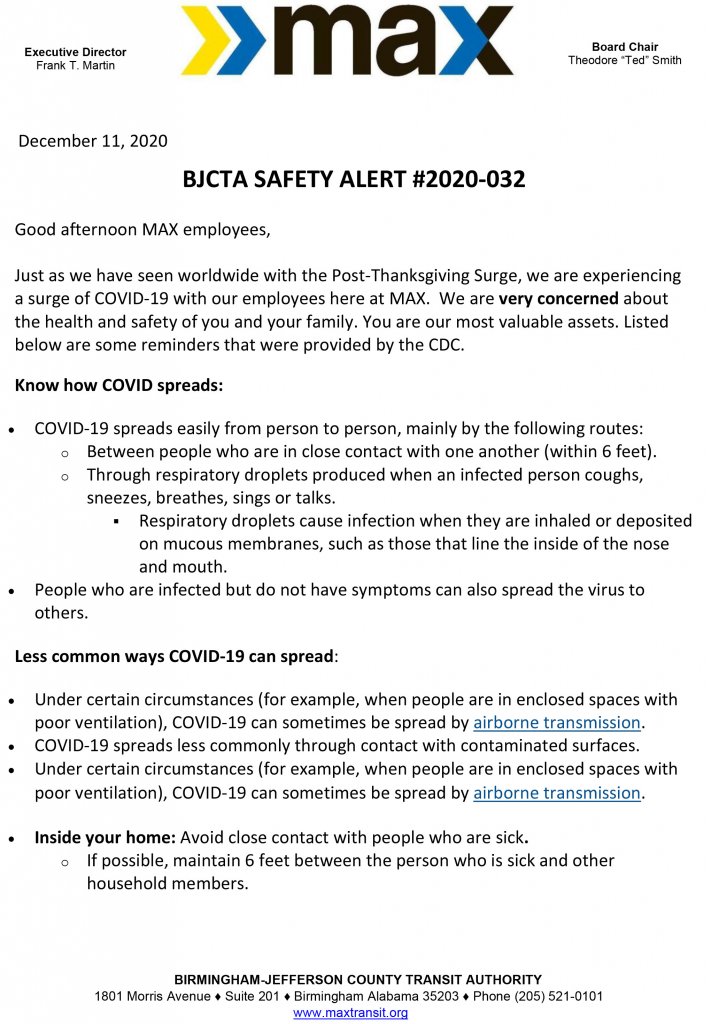 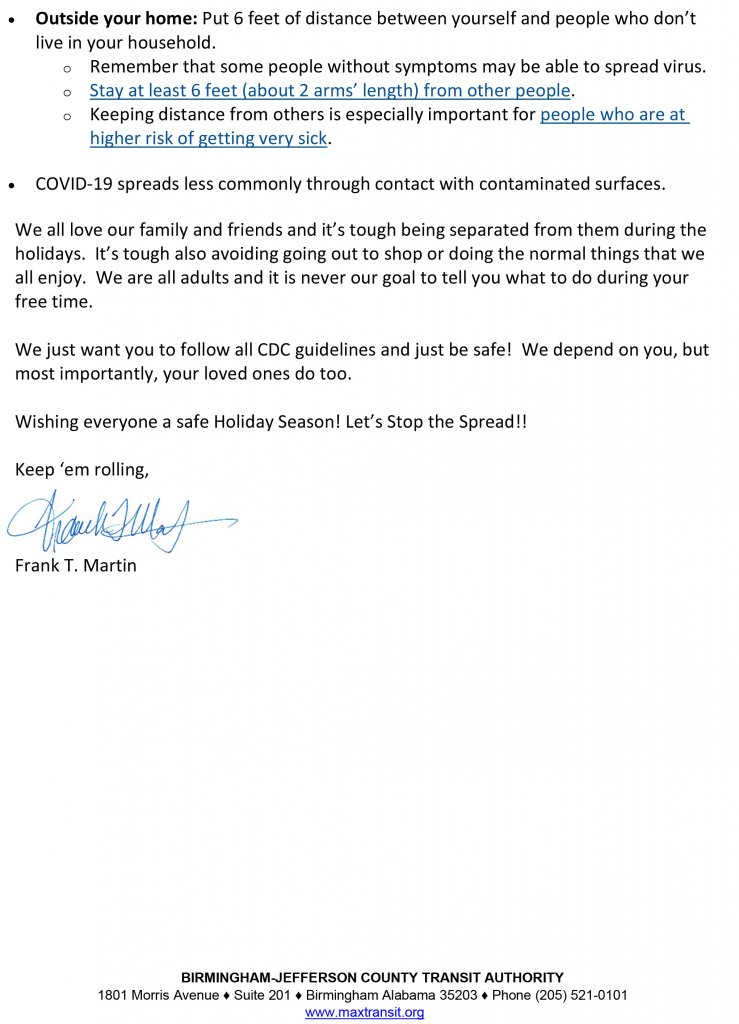