REGULAR MEETING OF THE BOARD OF DIRECTORS

REGULAR MEETING OF THE BOARD OF DIRECTORS

SPECIAL CALLED MEETING OF THE BJCTA BOARD OF DIRECTORS

Notice is now given for the following meetings of the
Birmingham-Jefferson County Transit Authority’s Board of Directors:

SPECIAL CALLED MEETING OF THE BJCTA BOARD OF DIRECTORS

** Parking – You are welcome to park in the BJCTA lot, located at 16th St. & Morris Ave

Fresh vegetables, fruit, eggs and honey will be sold to the public Monday through Friday, 12:30 – 5:30 p.m. Five farmers are currently confirmed to sell at the market, which will accept SNAP/EBT.

The market is a result of the Birmingham-Jefferson County Transit Authority and the City of Birmingham uniting to address the city’s food deserts. Almost 70% of Birmingham residents live in areas the United States Department of Agriculture has designated as food deserts, which are defined as an urban area where it is difficult to buy affordable or good-quality fresh food. The new market will aid in providing fresh produce to residents using the MAX system and traveling through downtown Birmingham.

The City of Birmingham received an initial grant of $50,000 from the Alabama Department of Economic and Community Affairs to start the Central Market. The City of Birmingham contributed an additional $100,000, the BJCTA provided $50,000 towards construction and $43,000 in-kind donations were given to move the Central Market from an idea to a reality. Hundreds of people use MAX daily, making the downtown hub an ideal location for the farmers market.

“Our hope is that by opening the Central Market at the MAX Central Station, Birmingham residents will find it easier to access the fresh food they need for themselves and their families,” said Mayor Woodfin. “But this market isn’t just for MAX riders, it is for the entire city.  We know that if barriers are removed to make it easier to access fresh and affordable food, we will have a healthier community.”

Organizers hope the market is just the beginning of seeing lives and people’s health improved.

“We are concerned about the lives of our customers and are thrilled to be able to offer them this service,” said Martin. “The Central Market has the possibility to make a real difference in the health of the entire community.”

The Paratransit Advisory Committee serves in an advisory capacity of advocates for transit.  During this meeting, the attendees may review transit information, upcoming projects, ask questions and discuss comments and complaints with BJCTA staff members. The Open Session will begin at 2:30 PM and will end at 3:30PM.

Written comments or complaints may be submitted during the meeting or by email to ada@bjcta.org.  Comment forms are available on BJCTA’s Website.

Six of the 11 buses were purchased from a $3.6 million competitive low emission, no emission award received by BJCTA in early 2016. The other five were purchased from existing Section 5339 (Bus and Bus Facilities) and Section 5307 (Preventative Maintenance) grant awards that were apportioned to BJCTA in 2018 and 2019 based on ridership data. All the new buses will be used to replace old fleet that have met their useful life. The useful life of these vehicles is 12 years or 500,000 miles. The average age of BJCTA’s fleet is approximately 6 years old.

“The BJCTA is always looking for ways to improve the quality our fleet with the goal of enhancing our customers experience.” said Frank T. Martin, BJCTA Executive Director. “These new buses have a higher curb switch which assist riders in wheelchairs or those needing assistance entering or exiting the bus. They are also equipped with improved WIFI, 19-inch displays monitors, and other upgraded features.”

The Birmingham-Jefferson County Transit Authority is the public transportation leader in Central Alabama. The Authority averages three million riders per year with more than 300 employees. For more information, visit www.maxtransit.org. 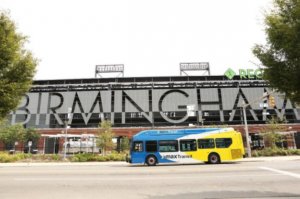 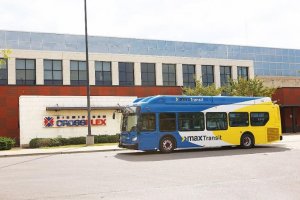 PUBLIC NOTICE – Regular Meeting of the BJCTA Board of Directors October 2, 2019

Notice is now given for the following meetings of the Birmingham- Jefferson County Transit Authority’s Board of Directors:

REGULAR MEETING OF THE BJCTA BOARD OF DIRECTORS